June 20, 2011
I found lemon grass in Namdhari's and thought I should try making some chicken rendang. I'd never made it before and well spent the better part of yesterday looking for some do-able recipes online. Found several.. and adapted it to the following recipe. I've left the components that I didn't use on from the original recipe, in case you have better luck and want to make it closer to the originial taste.

800 g chicken, cut to curry size pieces
5 tablespoons cooking oil (may have used more)
1 cup thick coconut milk
1 cup water
2 teaspoons tamarind pulp (soaked in some warm water for the juice and discard the seeds )
6 tablespoons kerisik (toasted coconut)
2 lemongrass sticks (bruised but in shape)
(1 tablespoon sugar/palm sugar or to taste- did not use, as liked the taste without the sweetness)
(6 kaffir lime leaves very finely sliced- did not use, as couldn't find them in the market)
Salt to taste 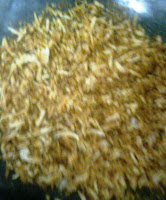 1. To make the kerisik- grate coconut, and toast it in a pan by constantly stirring to make it an even dark golden brown (refer to pic, though it's about half way done). Wait for it to cool, then run the blender on it so you get a brown powder that looks something like brown sugar.

2. To make the coconut milk- add grated coconut to the blender and powder it down. Then add warm water to the blended coconut. Squeeze out the milk using hands, over a sieve.

3. To make the chili- Boil some hot water and drop the chilies in it. In about ten minutes you will find them soft, snip off the top and run your fingers along the chili to remove the seeds. Keep aside. 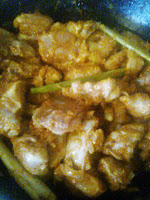 edients for the paste and run it in the blender to get a smooth paste.

5. Add the oil into a pan. Add the dry spices when oil is hot, stir for about ten seconds before adding the paste. Fry by stirring constantly, until the oil separates from the paste. This should take about a minute to two. At this point, i found that I added more oil that the recipe's recommended amount.

6. Add the chicken and the bruised lemon grass, and stir the paste with the chicken. Leave it to fry for about 3 minutes, with constant stirring to prevent the anything from sticking onto the pan. 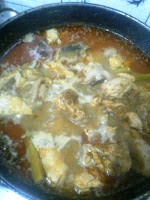 conut milk, kaffir leaves, sugar, tamarind and water to the pan, stirring it in to make an even mixture. Add some salt, about two a teaspoon. Turn the flame to low and let the chicken cook through. Rendang is a semi-dry dish, so the mixture needs to be boiled down to a gravy consistency.

8. Once that has happened, add the kerisik to blend into the dish and fry till the gravy has dried.

9. Serve hot with rice :) Unfortunately I don't have a picture of the finished product, planned on getting a pic this morning but it got emptied out last night. That can't be a bad thing! Flicked this picture from this site. It was the closest to what I'd made, and well there's another recipe 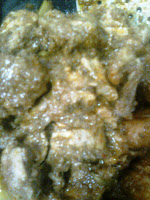 Note: The only thing I found lacking in the recipe is that there wasn't enough pow from the lemon grass, and hence the dish in itself is less fragrant. I'm not sure if this could be because the lemon grass that I had bought was not as fresh or because the recipe uses too less of it. When I make this again, I will most definitely add more of it... probably double the quantities or something. Do give it a try, I'll leave you with a slightly different recipe, that has a video as well. This looks like a promising recipe too.

Salt N Turmeric said…
The rendang looks good. I prefer the drier but moist version too. Some rendang are just too dry or too watery for my taste.
June 20, 2011 10:51 pm

Karishma said…
looks like ur a great cook. are you studying hotel management or culinary arts or something kike that?
June 26, 2011 6:38 pm

Popular posts from this blog

Where to get Rosemary, Sage, Basil, Thyme in Bangalore?

There was a time in Bangalore when finding exotic herbs involved a trip to some remote farm in Ooty and finding out their supply route to Bangalore.

Thankfully, much has changed.

Look what I found at Namdharis..namely the one on M.M road, off Mosque Road, Fraser Town.

﻿
I felt like a kid in a candy store! Recipes to what I've used them for, to follow!!

I recall seeing a collection of the same, in 1 MG Road, opposite Taj Vivanta as well, in case that is closer to you.

Good news! Found them in Russel Market, fresh and beautiful. Look for the shop that sells lemon grass, along the vegetable section. Better yet, the fella also has galangal, asparagus, leeks, bok choy, celery.. amongst a host of other things.

February 24, 2012
I first had a taste of this when I was watching Cricket at the Adelaide Oval. One of our office colleagues had brought it over, and given it was summer, we'd had something of a picnic at the stadium.

It definitely is not for the calorie conscious, but would classify as comfort food for sure! I remember not watching cricket, but enjoying this more-ish dish, to such an extent that I got the recipe off her, and attempted making it and have made it at least 4 times the last year. The only problem is, I haven't found a cob loaf in Bangalore.

I tried using the neighborhood bun, too soft, too small.
I tried using sour dough, from breadworks, too hard.
So today I tried using a multi grain loaf, that also strays from the traditional round shaped cob loaf..

Here's a recipe close enough to the one that my friend gave me..

1. I used frozen American Sweet Corn instead of canned corn kernels.
2. I couldn't find the usual Milk Maid fresh cream (that has the taste of sour cream- …
Post a comment
Read more

Saro
I am a woman of three cultures, straddling modernity, striving to accept tradition in the name of preserving culture and ultimately, loosing the battle by not getting anywhere~these should be apparent as you read my posts :)